To save a little money on this job (around $1000), I had the builder pull the window trim out of his contract and I did it myself. It's actually not that hard when you have a compound miter saw (on loan from my Brother-In-Law). It took some trial and error, but wood is cheap. I did buy myself a present to help...A Skil Router... 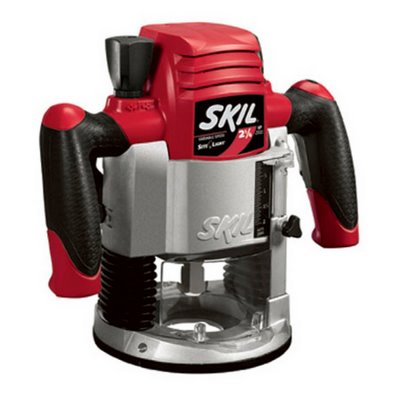 This thing is sweeeet. I should have gotten a router table to go with it, but c'est la vie.

For the long window in the bathroom, I made the center a little thicker than the ends (in a nice gentle arc) so it would act as a shelf for candles or shampoo bottles. It's a nice little touch that I wouldn't have had if I let the builder do it.

I'll have to go back and sink the nails in all the trim, when I find my tool. Then I'll have to apply caulk or spackle to the holes.

Posted by llamoure at 6:19 AM No comments:

So, I had the contractor send somebody over to finish the flooring that the plumber flooded. My In-Laws have stopped by a couple of times, my mother-in-law watchs the kids while my father-in-law handles some of the tasks on my list. I was able to lay the Pergo flooring on my ground floor area in a little over two days by myself, which included ripping up half of it to reposition the plastic underlayment. (Note: The directions call for overlapping the plastic by 8" on either side, which means a 2.5' wide roll of plastic actually only covers 14" - Yes, it means you have to buy nearly 3 times more plastic)

I have one more Pergo floor to install and then I'll have someone come in and put down carpet in three rooms. I still have to install trim around the flooring in some areas. I also will be replacing the carpeted contractor stairs with Oak hardwood stairs and I'll be adding a nice railing (the old railing was an iron POS that was probably leftover from some exterior job the original builder had lying around).

Posted by llamoure at 5:56 AM No comments:

We left the house for a couple hours yesterday. The plumbers were finishing up their work. When we returned, I gave a tour of the new addition to one of our friends. During the tour, I noticed that the floor in the walk-in-closet was under a thin layer of water...I soaked it up with a towel and more water started draining out of the Pergo. Now, you're not supposed to wet mop Pergo, so I'm guessing leaving it soaking in a layer of water is bad.

I immediately called my contractor, who called the plumber, who showed up bright and early this morning to locate the leak. The plumber investigated for quite some time and finally called the guys that had been working on the job. They admitted that while they were working, they had removed a cap from a pipe in the bathroom vanity and somehow the water got turned on. They had cleaned up the flood in the bathroom, so that by the time we got home, there was no water in there, leaving an inexplicable mess in the walk-in-closet.

The plumber offered to pay for more Pergo, if I had to pull it up, which later the contractor confirmed was the best course of action. The stuff is meant to go down, but not to come back up. I eventually had to take out 4 rows of Pergo to get rid of all the soaked boards and most of them got severely chipped while I was removing them. It's going to take me hours to replace them. There are three complicated cuts in the last row, approximately 2 easy cuts, and then the T-Moulding for the doorways needs to be trimmed to fit and that can be complicated.

Argh. I was so ready to move on to other parts of the house.

My father-in-law came down again on Thursday to help me finish up. He worked on the baseboard trim, while I finished the flooring. Then I put a first coat of primer on all the doors.

What's left? The windows need trim (I'm waiting for inspiration). The downstairs flooring (I'm waiting for Lowes to get a new shipment of Pergo). The shower doors (Charlie is waiting for the glass place to create them). The sinks for both bathrooms (Charlie ordered them Friday). The stairs need to be covered in wood (I need to find a supplier). There's lots of little stuff that'll take awhile to finish up. But we should be able to start moving stuff today.

Posted by llamoure at 6:34 AM No comments:

The final inspection was last Friday. The inspector walked around a bit with Charlie. The inspector wanted to fail it for several things, (siding - I'm getting estimates, Shower doors - on order, bathroom sinks - on order) but Charlie talked him into passing almost everything, but noting the items that were incomplete. So for instance, we passed HVAC with no restrictions, but failed plumbing because the sinks aren't in yet.
Posted by llamoure at 4:34 AM No comments:

ABL's brother James and his GF Miss Patty came over to help us apply color to the walls. After they left, ABL and I did a bit more painting by ourselves. Then my parents and my Aunt and Uncle showed up to knock out the rest of the painting. 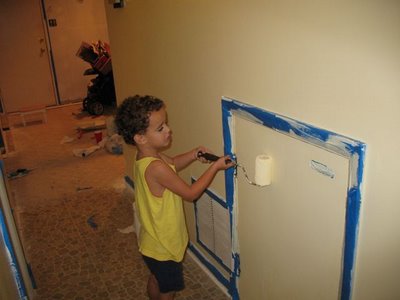 My dad and I started laying down a Pergo Laminate floor (Summerview Oak from the Casual Living collection). The Pergo comes with an underlayment already glued to the bottom and snaps in to place without glue. The floor is floating, meaning it isn't attached to the walls or the subfloor. It just lays there like a wooden rug. The Pergo was $52.24 a box, each box covers 17.6 square feet. My initial purchase was 24 boxes and represented everything Lowes had on the shelf (I was able to fit 24 boxes in my Cav, but it wasn't pretty). I went back a second time and picked up another 10 boxes, and I put 24 boxes on order (ABL wants a lot of the downstairs covered in wood). 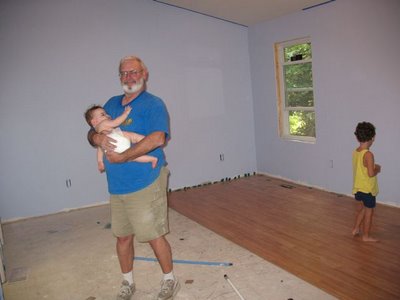 Here you can see my dad, holding TG, and RJ has his back turned to the camera. The room is about half (or a third) covered by the laminate and this represents about a half days work by the two of us. I was able to finish the rest of the room by myself on Sunday. The transitions at the doors can be very frustrating.

My father-in-law came down on Monday and Tuesday to help me out. He and I were able to put down laminate in the hallway and the spare bedroom. It looks amazing. He's coming over today to help with the baseboard molding. Charlie's crew cut all the molding. In some cases it was nailed up already and I had to pull it off to put down the floor; in other cases, I had asked them to just cut it to length and I'd nail it up later. Once the molding is up, we can start moving furniture this weekend.

Posted by llamoure at 4:05 AM No comments: