I Love My Driveway

We've been in our house about 12 years and I've never done anything to the driveway. The asphalt was starting to get wavey, creating a rut where our car tires go and cracks were forming. My father-in-law passed along a copy of "Family Handyman" magazine and they recommend sealing the driveway every 5 years, Woops! I spent a day powerwashing the driveway and then filling the cracks with a rubberized crack filling compound.

I bought a bunch of 5 gallon drums of 10 year driveway sealer, it was the best stuff they had and came with all sorts of good stuff like sand and urethane gel...If you're going to do this for your own driveway, definitely spend the $6 and buy a mixer from the paint section. 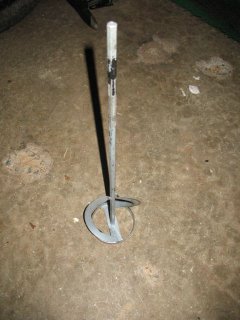 I didn't initially buy one and it was a real chore mixing the sealer. I bought one for the second coat and it made things so much easier. BTW, I drilled a hole in one of the lids, and pulled the mixer through it before connecting it to the drill, that way it wouldn't splatter everywhere.

I went for a 2 hour bike ride between coats and when I came back, it was ready for the second coat. Here's a before (you cant see it, but the driveway had lots of paint stains, dirt, and believe it or not toe nail polish.) 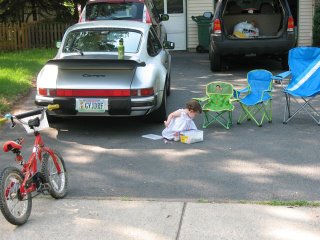 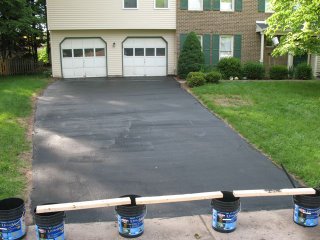 I know, it might be hard to tell from these two photos, but if you look at the before, I had grass growing in the crack at the bottom right hand corner of the picture. My plan was for two thin coats, but the first coat went on a little thick, mostly because it hadn't been done in so long that there were a lot of cracks and crevices that needed to be filled up (it also used almost an extra 5 gallons more than I expected too). Since the first coat had left a much smoother surface, I used a lot less sealer on the second coat. It looks so good right now, I find myself drawn to the window to look at it. Sad, I know.