A Big Hole In The Wall And No AC

Sunday my brother-in-law James joined us to help get the room ready for the electricians. He brought a sawzall, which is almost as much fun as a chainsaw. We pulled the huge window out. Here's my dad and my BIL James doing the heavy lifting (notice I'm supervising): 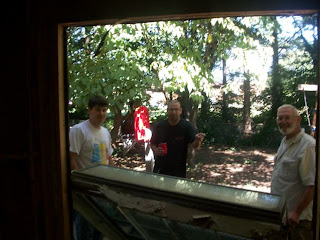 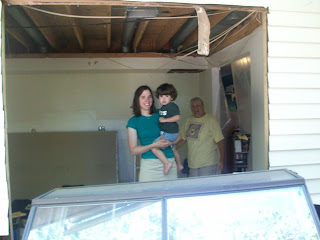 The wall framed and partially covered with OSB (oriented Strand Board). 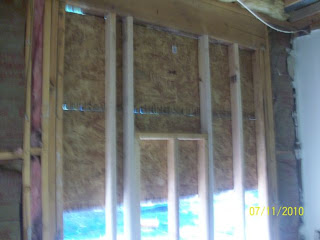 I gotta say, OSB is some tough SHIT. We had a tough time nailing through it. James and I both hit our thumbs one too many times. By the time we got to the bottom panel, we were launching so many nails we got a bit giggly. I tried to con my kids into holding the nails for us, but James kept warning them that it was painful. You can see a lot of light leaking between the panels, so I used some "Great Stuff" for windows and doors to plug the gaps. I framed the wall for a new window; a special order from Lowes (24" x 30"). The window won't be in for another two weeks, so I framed it and put the plywood right over it.

Meanwhile, my dad was inside putting up boards around the perimeter of the room so we could nail the sheetrock into them and trying to force an HVAC duct (that was just passing through the kitchen) up above the bottom of the rafters.

The duct that feeds air into the room was built for the drop ceiling, so I had to cut it down to fit the new ceiling height.

We managed to get everything on my list done.