I'm A Bit Disappointed I Didn't Get To Use A Chainsaw...

Adrienne worked late into Friday night to empty the kitchen. My parent's showed up around 10am on Saturday to help me demo the kitchen. It went fairly quickly. The wall cabinets were held up by 4 screws into the wall and usually 2 into the next cabinet. The base cabinets were somewhat harder to remove so my dad resorted to the persuader (AKA The Sledgehammer). We pulled down the ceiling sheetrock and found a nasty surprise: 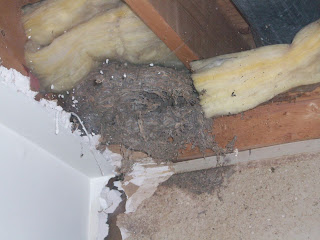 Yeah, that's a Wasp Nest...If it had been an active hive, we would have been dead.
The second surprise was all the corners that were cut. Back in 1978/1979, this home was SLAPPED together. The wall that had the stove on it was built with 2"x3"s. The electrical wiring was just draped above the drop ceiling. The scary thing was the wiring to the stove...It was aluminum. Yes, Aluminum is a good conductor, until it oxidizes, then it burns down your house. Here's one for all my Telco fans. When I pulled the plate off the old phone jack I found this: 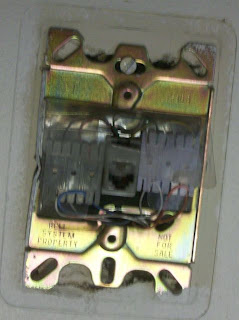 That says "Bell System Property" and "Not For Sale". So, if there's a Baby Bell out there that wants it back and can prove that Ma Bell left it to you in her will, you can have it back. It'll be in a big green can at the end of my driveway.

As Saturday drew to a close I felt way ahead of schedule. Here are some pictures of the devastation. If you're familiar with my house, the first is a picture looking at the wall that had the sink and the Fridge. The fridge lived between the wall and the stepladder. 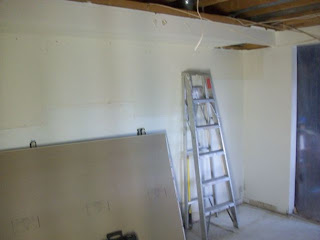 The second picture is looking at the window across from the sink. This will have the new oven, cooktop, and microwave. 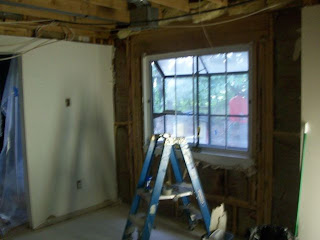 The final picture is the wall that had the stove on it. This wall will eventually get some cabinets. 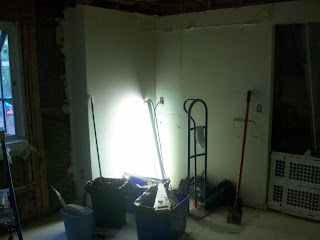