So...To finish out the kitchen, I needed to move the 300 pound refrigerator sideways down a hallway and then across my living room and then into the kitchen. This was going to take some brawn to avoid scratching the new-ish Pergo and the brand new cork floor I put down in the kitchen... Or some brains...

My kids have been watching Phineas and Ferb lately, so I decided to create a hovercraft like device to move the refrigerator. First attempt: Disaster. Second Attempt: Mild success. Third Attempt: Success. 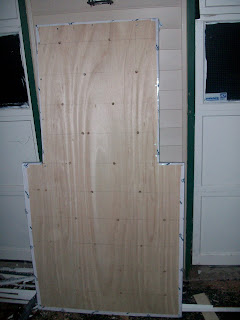 This was the first attempt. I had some scrap wood lying around, but nothing big enough for the top, so I had to put a couple of pieces together. The bottom here (that you see) is 5 mm plywood I had lying around (I was using it to shim up the cabinets). I drilled holes in it similar to an air hockey table. I plugged it in and it wouldn't work, the design seemed too complicated, so I simplified it on my second attempt. 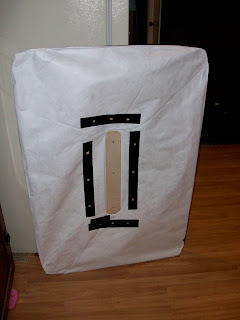 I went and bought 1/2 plywood for the top and then I stapled some spare tyvek house sheathing to the bottom. I used gorilla tape to keep the air from leaking out around the staples. In the middle of the bottom I screwed that small piece of 5mm plywood to create a cavity (when the tyvek is inflated). I put gorilla tape around the wood to reinforce the tyvek as I cut holes through it. I used the fan from the kids bouncy castle. It inflates the tyvek and then air leaks out the holes to the center cavity. It then leaks out under the tyvek and the creates what is known as an air film bearing for the contraption to slide on.

When I first turned it on with me on it, the bag inflated right away, but it wouldn't slide, so I cut some more holes in the tyvek on the bottom. That seemed to do the trick. But it wasn't as free sliding as I hoped. You really had to be balanced to slide and I wasn't sure if the fridge would balance well on it.

I had some constraints in the design process. My hallway is 36 inches wide, but with the base moulding and quarter round, I lose a good bit on either side, so my width had to be around 33 inches (the fridge is 32" deep). The fridge is 36 inches long and I needed some room on one side for the fan, so I made the length 48 inches (and I rounded the corners).

Our first attempt to move the fridge down the hall was disastrous. The bag wouldn't inflate because the fridge had the thing trapped against the floor, so I had to put some wood under the side, so air could get under it. Once we got it up, ABL pulled it down the hall until it got stuck. The door handles jammed it. So we backed it out and I pulled the doors off. On the third attempt, the refrigerator lost a lot of weight and once we got it balanced on the board, it easily slid down the hall and into the kitchen. eezy peazy (as my daughter says these days). Here's me and my son on the board: 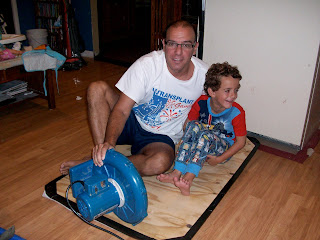 And a pic of the tyvek inflated. 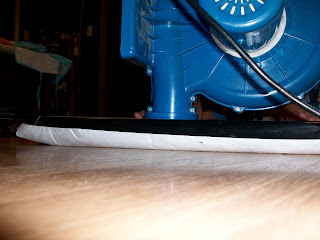